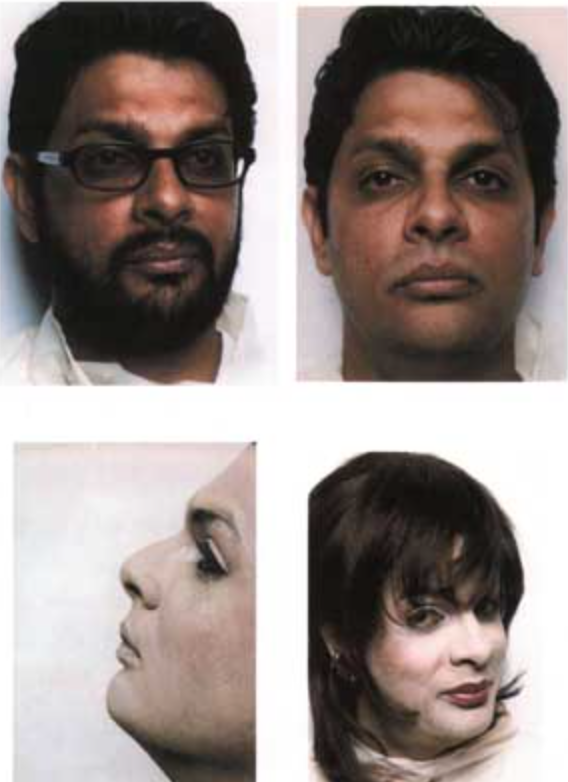 Colored Folks was a collaboration between  Oreet Ashery and Shaheen Merali  (2001). The remits set for the work were to undo cultural phenomenon such as black facing and white facing of Asian and Black actors. The conversations leading to the work  raised issues and questions around  gender,  identity, authenticity, racism ( black facing and white facing of Asian and Black actors)  and problematic notions of ‘becoming’, as well as the sociopolitical  conditions of  the two artists as minorities. Colored Folks was first performed at Toynbee Studios, where Ashery and Merali spent several hours being transformed by the late make-up artist and stylist Brixton Bradley in a room away from the audience. A live feed projected the footage onto a monitor in a second room, where people could watch the progress. A VJ mixed footage from the previous months’ conversations leading up to the performance with the live footage from the performance itself, distorting the sense of time, yet giving the audience plenty of time to contextualise the process of the work and contemplate the impossibility of becoming an other. At the end of the performance, Merali and Ashery stood facing each other at the exit door, while audience members had to squeeze out through the door, pressing against the made-up performers and having white and brown paint staining their clothes.

The work was made at a time ( 2000- 2001) when it was part of a large and perfomative body of work of myself  ‘queer becoming’ various figures of men; looking at constructions of gender, race, ethnicity, religion and masculinity.  I performed as an Arab man ( this relationship is brought about through  my heritage of being a 7th generation Jew born in Jerusalem and what i describe as a Palestinian Jew), a Muslim man ( my father’s family lived in the Muslim quarter of Jerusalem), an Orthodox Jewish alter ego ( my mother’s side of the family are orthodox Jews, I was accused of Anti-Semitism on occasions performing this character),  a Sufi saint  investigating the relationship of Sarmad the Saint to Judaism) and a Turkish Jewish-come-Muslim Messiah ( Shabbtai Zevi).  It is in this context that I was aiming to undo the the racist black-facing evident in ‘cultural becoming’ and the artificial and impossible construction stage by stage of’ being made to become a black man through make-up and thus exposing the mechanism of this futility. At the time I was also looking at racist and anti semitic representational relationships of  black and Jewish immigrant identities. 18 years later, some of the work that exist now in distribution and online circulation  is a fixed photographic documentation of the original performance at Toynbee Studios   – depicting myself – Ashery –  ‘becoming’ a black man and  is divorced from the discursive context and intentions of the original live performance and process-based work. Where access if found, the work strives to be distributed within its political and discursive intentions. However, images of the work have been distributed without any permission and are taken out of context despite endless attempt to prohibit this.

Essay: Jean Fisher, ‘Tales from the Dark Side: Double Agency’ in Blackpop: A Retrospective of the Work of Shaheen Merali, Saqui Books, 2004