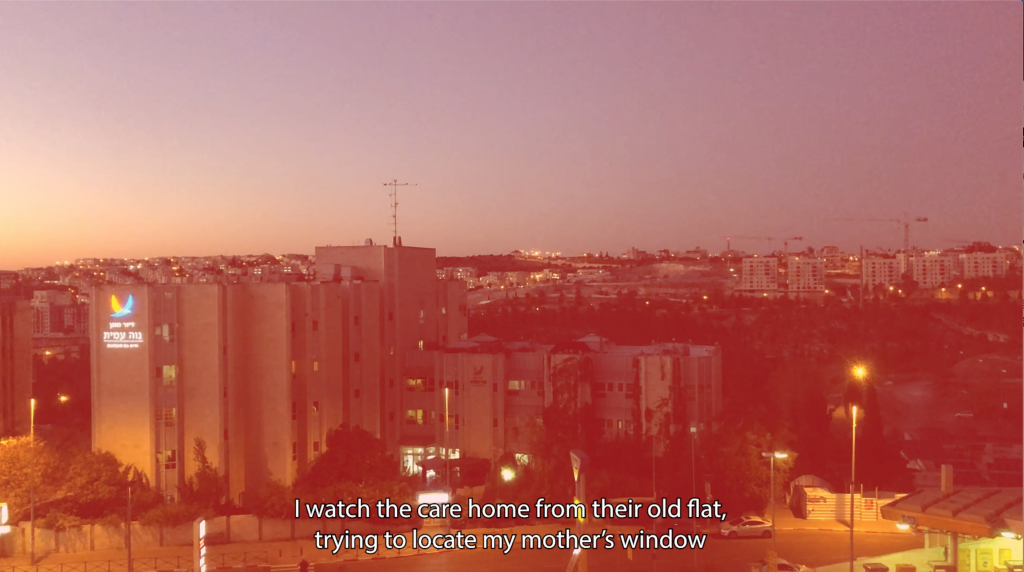 A film by Oreet Ashery

The film is a counter-archive to the conventional family album, utilising the intimacy of smartphone technology as a witness to the last years of my father’s life and his abrupt death. The practice of filming becomes an act of care, as the digital footage fluctuates between remote communication and our physical proximity during my visits to Jerusalem. The phone footage is intersected with constructed scenes depicting otherworldly rituals of beckoning, mourning and play performed by two younger family members.

The film gives voice to my parents’ caregiver who narrates their daily routines leading up to my father’s fall and subsequent hospitalisation, ultimately resulting in my mother’s move into a care home. The commissioned soundtrack underscores the delicately charged atmosphere of looming decline. I capture my father’s performative playfulness, shadowed by undiagnosed dementia, through a series of revealing exchanges that often address the camera directly and raise potent questions around intimate surveillance. In one scene I am dressed in my father’s clothes, re-enacting his fall in an attempt to embody, grieve and make sense of the rapid and confronting story of loss and love.

© Dying Under Your Eyes has been commissioned by Wellcome Collection, 2019.

How we die is how we live only more so, solo exhibition, 10 September – 20 October, 2019, Centre of Contemporary Art, Prague

* My father was part of a small ancestry of indigenous Jewish community that resided in the Muslim Quarter in Jerusalem before moving outside the walls of the Old City. I filmed my father in Jerusalem between 2011-2018 and was raised by him to respect Palestinian people’s rights for dignified lives and death.