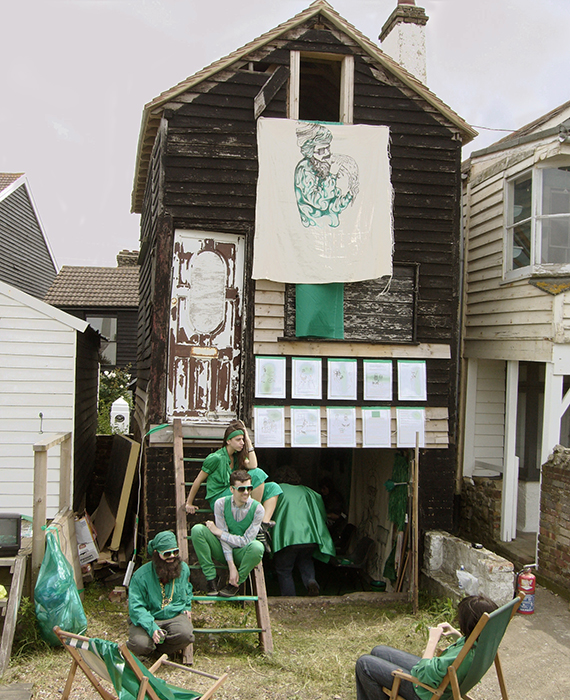 Two weeks of interactive performance/installation residency at the fisherman’s hut. The Saint/s of Whitstable was commissioned by the Whitstable Biennale 2008, directed by Sue Jones.

In The Saint/s of Whitstable, Ashery explored the messianic figure of Shabbtai Zevi. To download ‘Shabbtai Zevi; scrap book towards a future performance’, from the publication Performing/Knowing, please click here.

Ashery inhabited a derelict fisherman’s hut for the duration of the biennale. The ground floor amd the adjacent outdoor area were used as a performance space installed with grungy green props. All those who performed in the space wore low-cost green clothes, referencing notions of cult or some form of ‘outsiderness’. Shabbtai wore green despite the prohibition of Jews to do so, given that it was the Islamic colour of respect. This in fact was such an odd act that it granted him the Sultan’s affection and permission to ride a horse, another activity prohibited to Jews at the time. Shabbtai circled Jerusalem seven times on a horse, wearing green, to the utter amazement of the Jewish community. In the context of The Saint/s of Whitstable the colour green worn by all represented a nostalgic notion of an individualistic spirit of revolt against all odds. 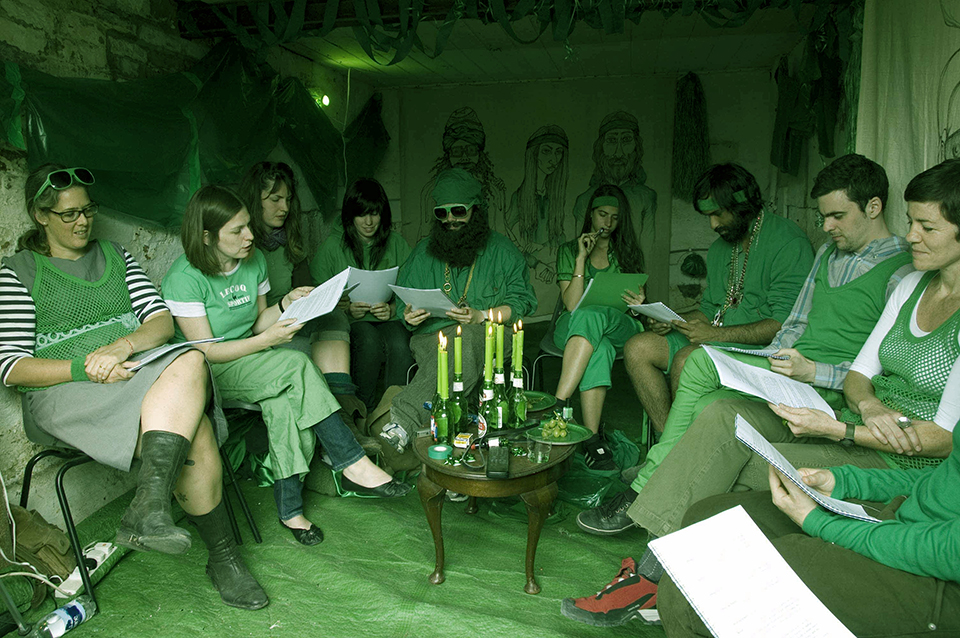 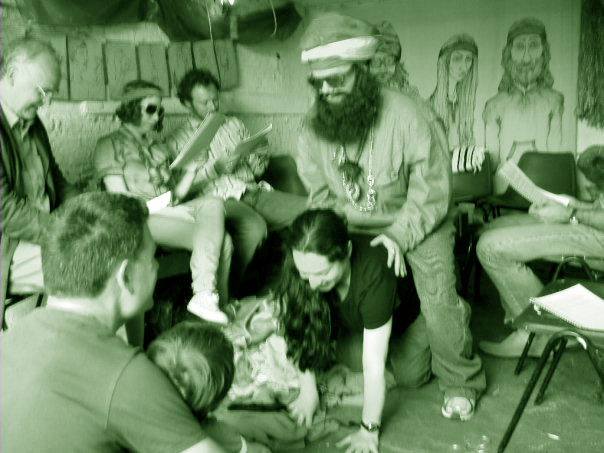 The Saint/s of Whitstable included the daily reading of the play Shabbtai, Sarah, Nathan – first reading. Every day, different visitors/participants constituted a new group that read the play, usually with one other friend or collaborator. Each group created a different dynamic that gave the play another tone. Visitors watched the reading in the performance space, hence creating two types of audience; viewers and participants, both intimate and arbitrary. The play is humorous yet deals densely with historical documents around Shabbtai’s sense of performative transgression and his love relationships with Nathan of Gaza and Sarah. The play employs certain ‘silly’ and amateurish tactics, bringing into question the potential agency embedded in ‘strange acts’. Questions around faith, charisma, celebrity culture, mental illness, religion and bisexuality, and the relationships between visual art, performance art and theatre are all rooted in the script. 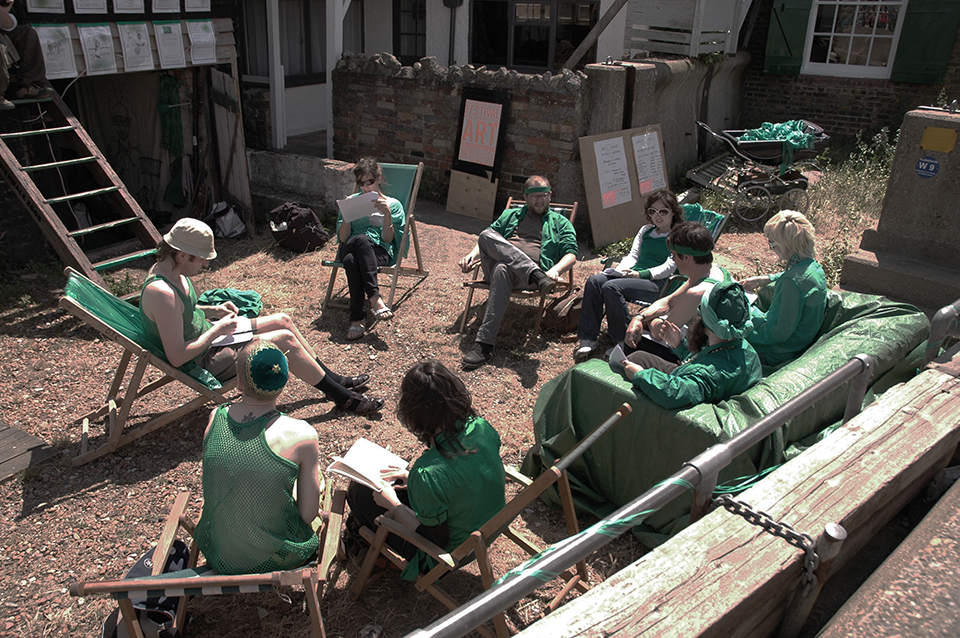 Ashery and John Cussans ran a Free School session using a text about ST Paul from Giogio Agamben’s The Time That Remains. The session was based on a Talmudic model of studying whereby texts are debated , discussed and referenced in pairs, after which each pair presents an insight arising from the debate to the group as a whole. The Hebrew word Asif, meaning the collection of wheat at harvest time, is used in this Talmudic model of learning, as a metaphor for the collection of the insights by the group. The group itself is called chavurah from the Aramaic word meaning word meaning friends or fellowship.

ESIMORP was a voice performance that attempted to mimic the word ‘pomise’ pronounced backwards, or ‘played back’, alluding to satanic verses that are spoken in reverse. The notion of a promise was connected to the idea of the false messiah and the activity of hearing God through the headphones. 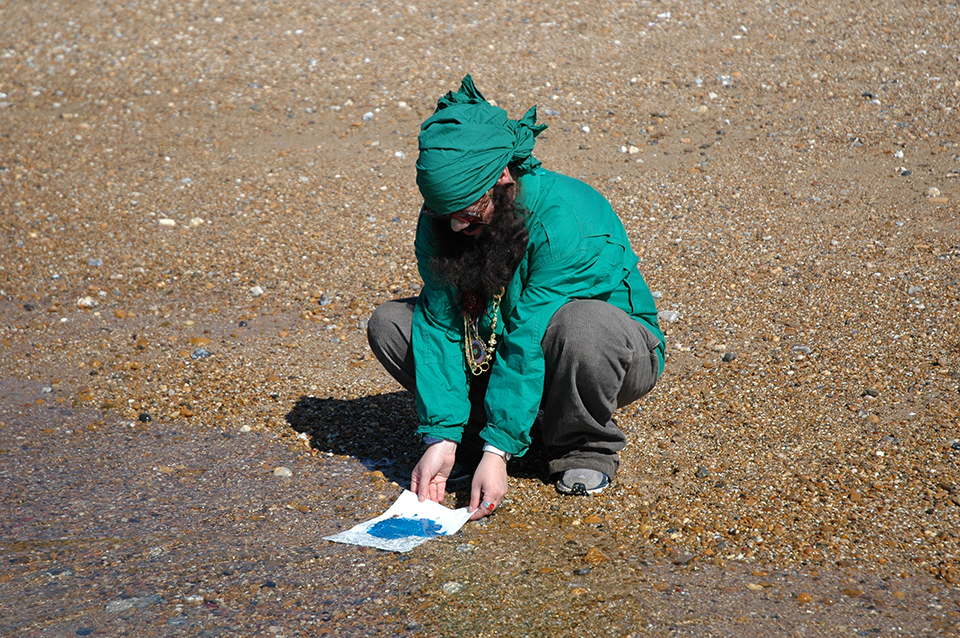 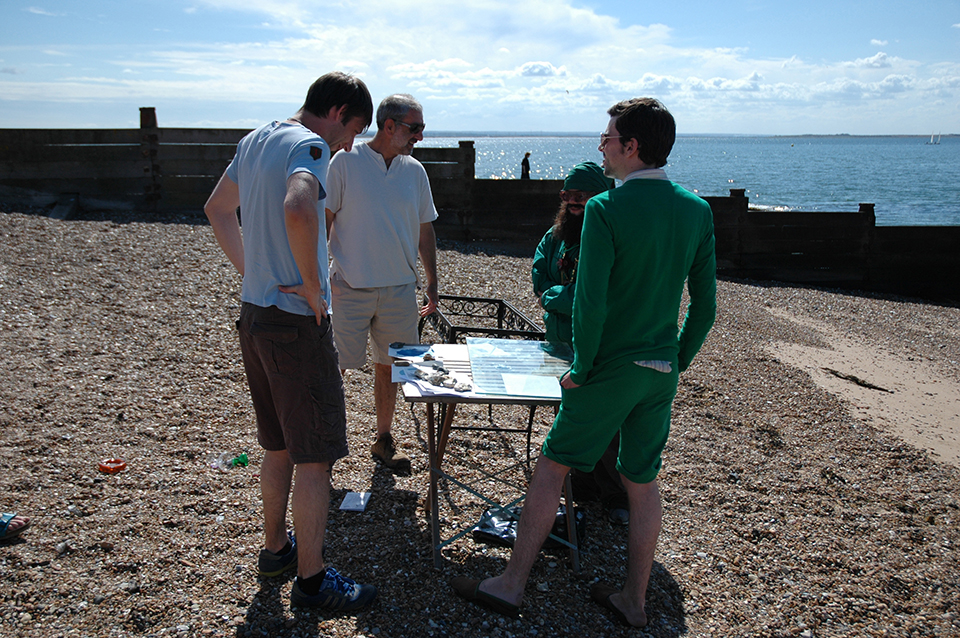 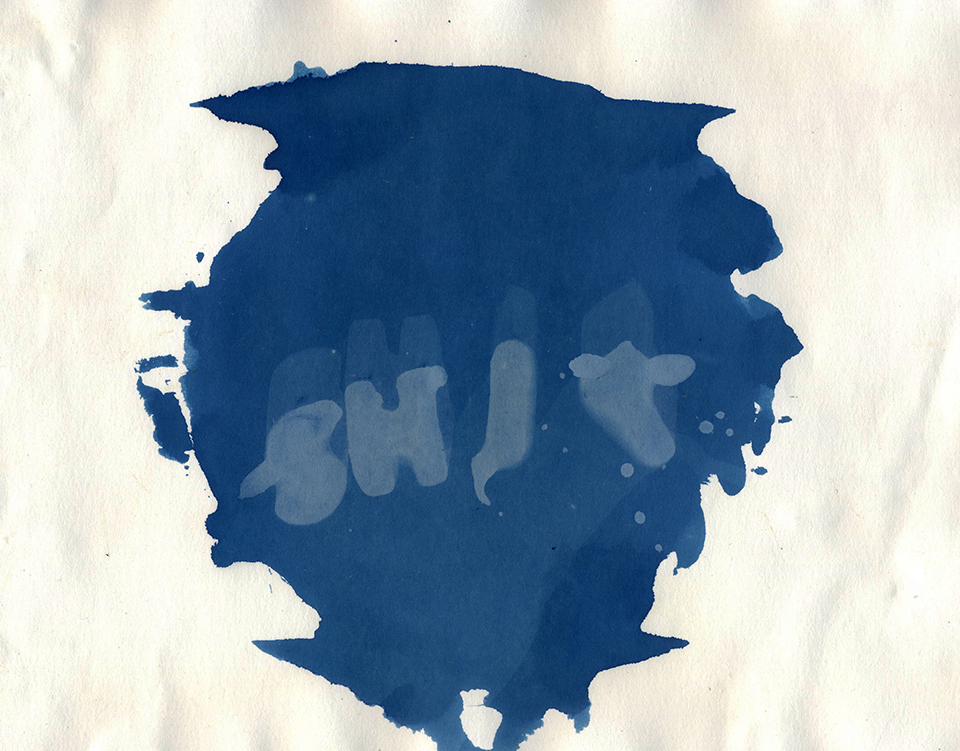 Shabbtai claimed to have ‘stopped’ the sun by his command. Ashery and McCormack were more interested in using the sun and the situation in other ways. They coated watercolour papers with Cyanotype emulsion at night by moonlight, then developed the paper in the sunlight and fixed the prints in the sea water. Thirty Cyanotype editions were made. 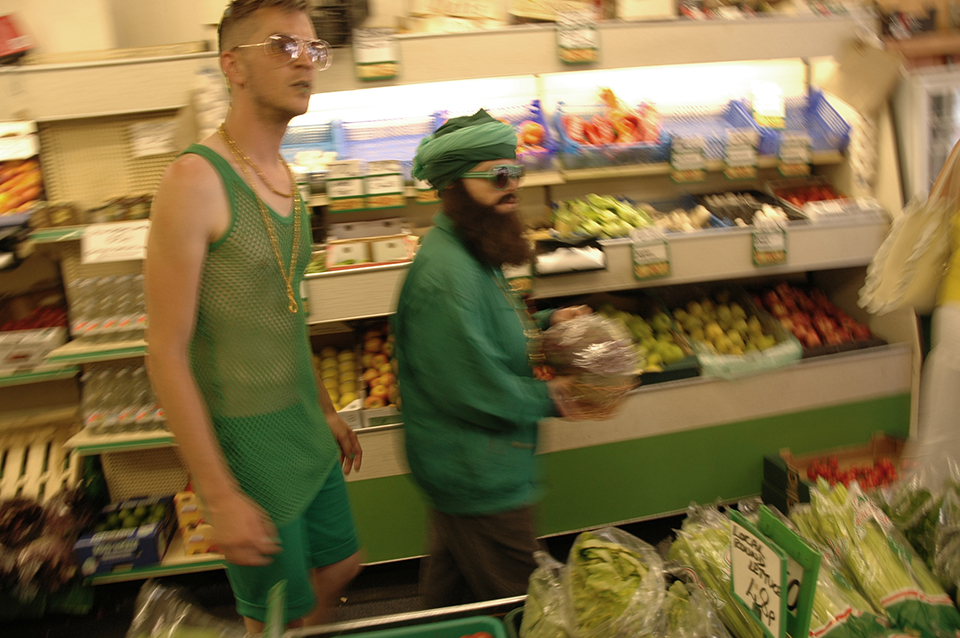 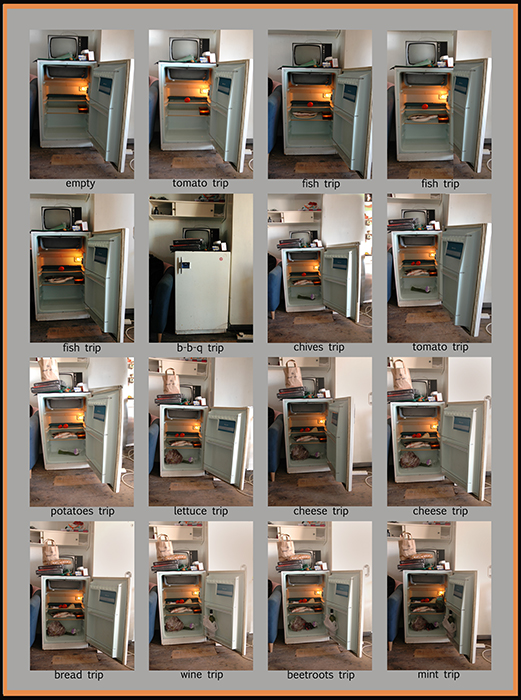 One Ingredient at a Time

Based on one of Shabbtai’s ‘Strange Acts’, Ashery and Mitchelson bought ingredients for a meal one at a time: one tomato, one lemon, one fish, etc. It took fifteen trips, five hours and about fifty kilometres. The repeated trips created a sense of presence and bemusement in the small town of Whitstable. After the trips were completed, Ashery and Mitchelson fasted for twenty-four hours and cooked the meal by the sea for the visitors Gavin Butt and Dominic Johnson. 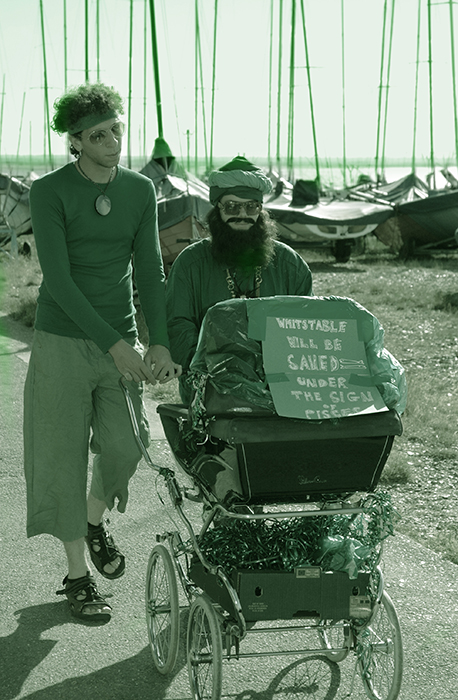 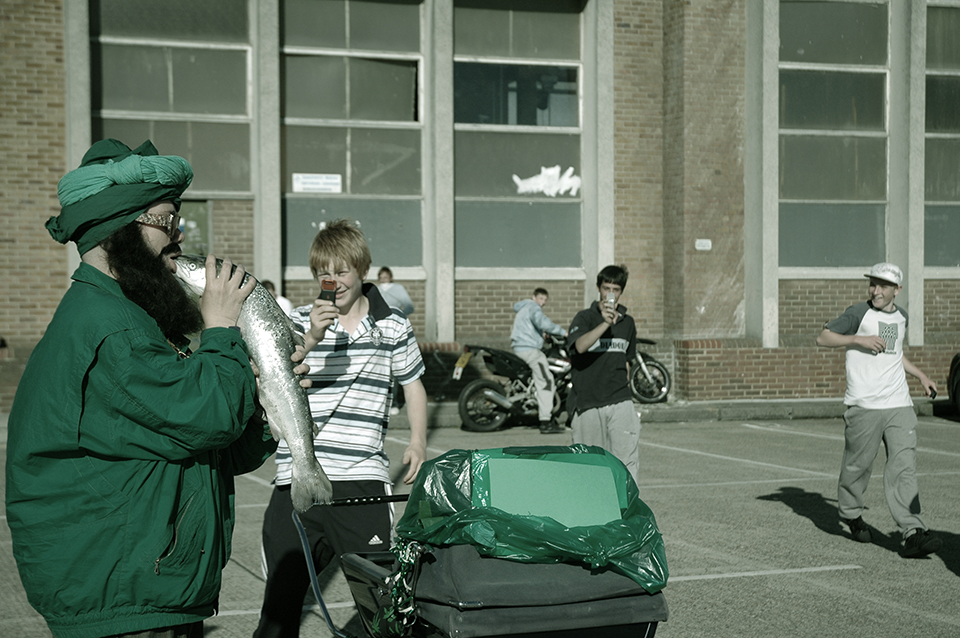 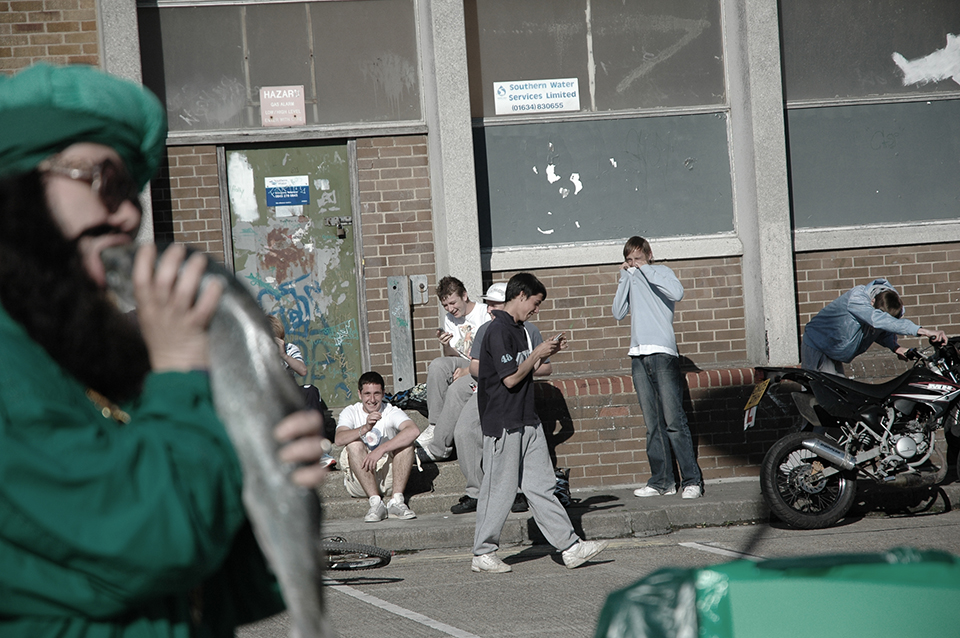 Shabbtai walked with a fish in a pram to awaken a sense of a Jewish return en masse to Zion as a salvation under the the sign of Pisces. In this re-enactment, Ashery and Lobel walked to a neglected community centre where Ashery proceeded to kiss the fish. A sign on the pram read ‘Whitstable will be Saved Under the Sign of Pisces’. Although Whitstable’s seafront and the town centre has an affluent appeal, supported mainly by tourism, less immediately visible areas of Whitstable suffer poverty and social exclusion. This re-enactment uses the Kabbalistic notion of Tikkun, meaning repairing, mending, fixing, restoring. 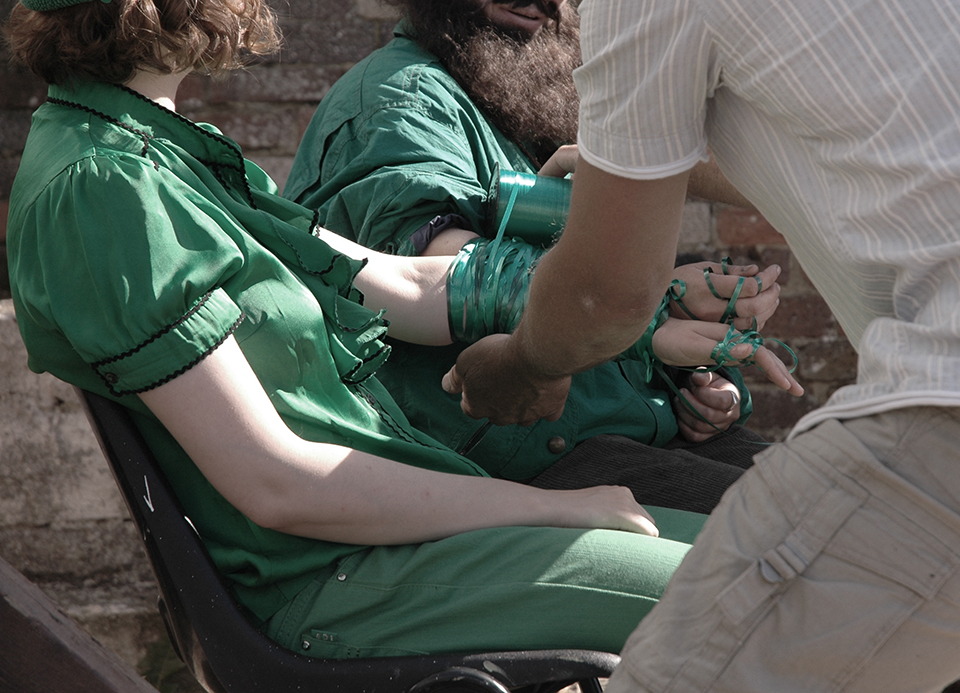 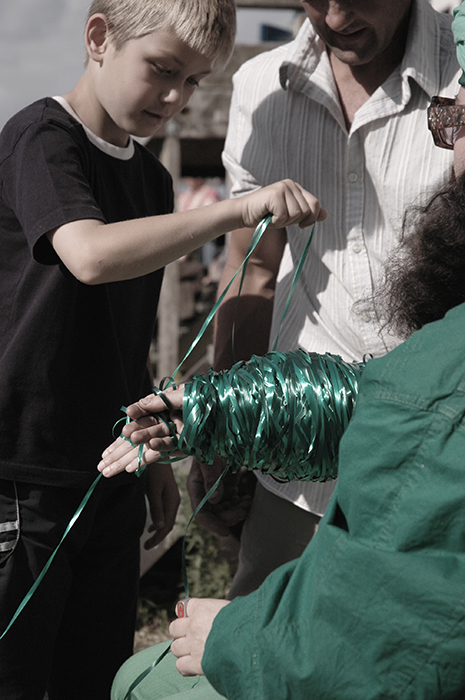 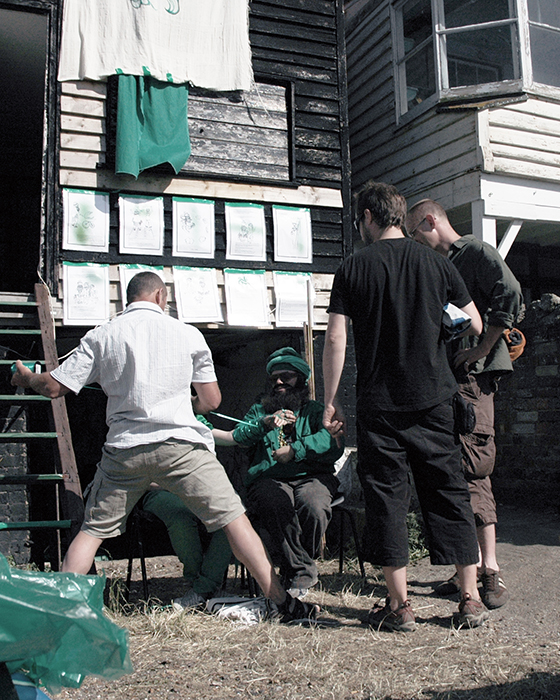 After Shabbtai converted to Islam, those opposing his conversion claimed that he had sex with a man wearing Jewish phylacteries, presumably as an extreme blasphemous act, renouncing his Jewish faith. Ashery and Neis bound their arms together with 1,000 metres of of green thread. A number of male passers-by joined in to help with the task.