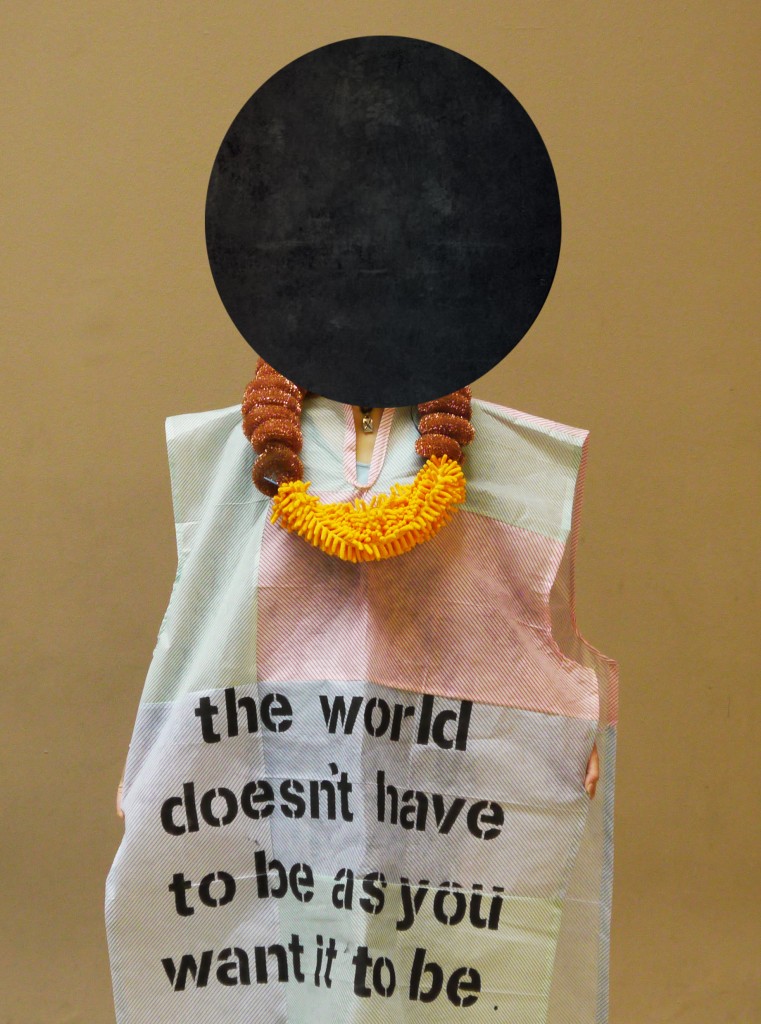 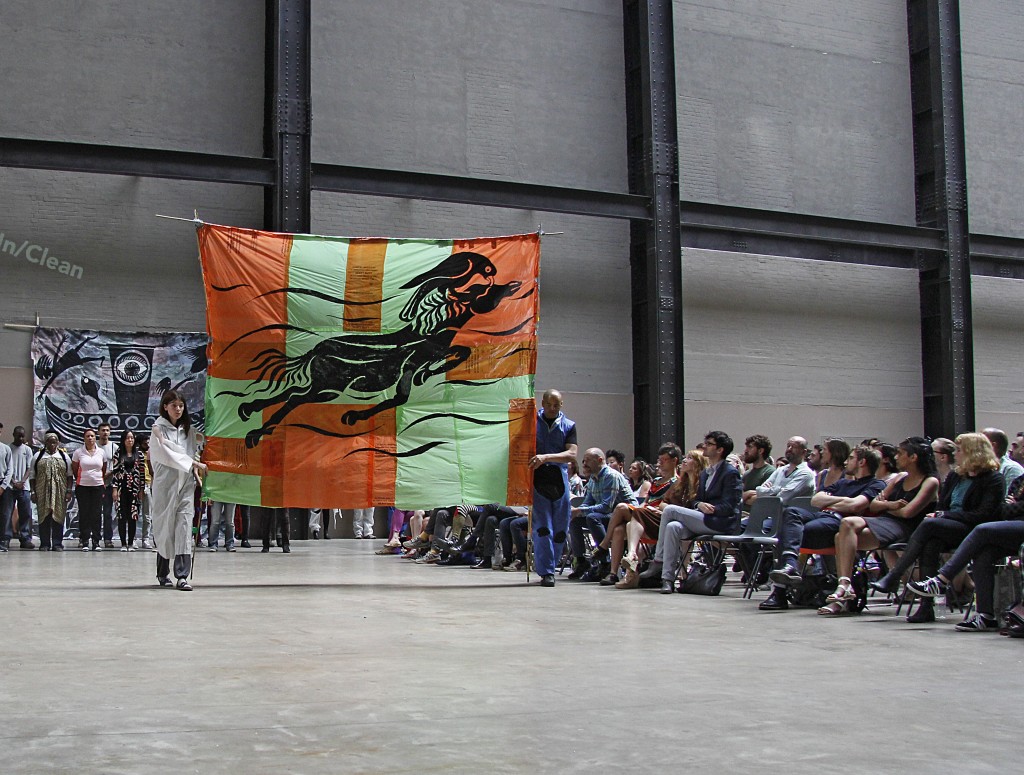 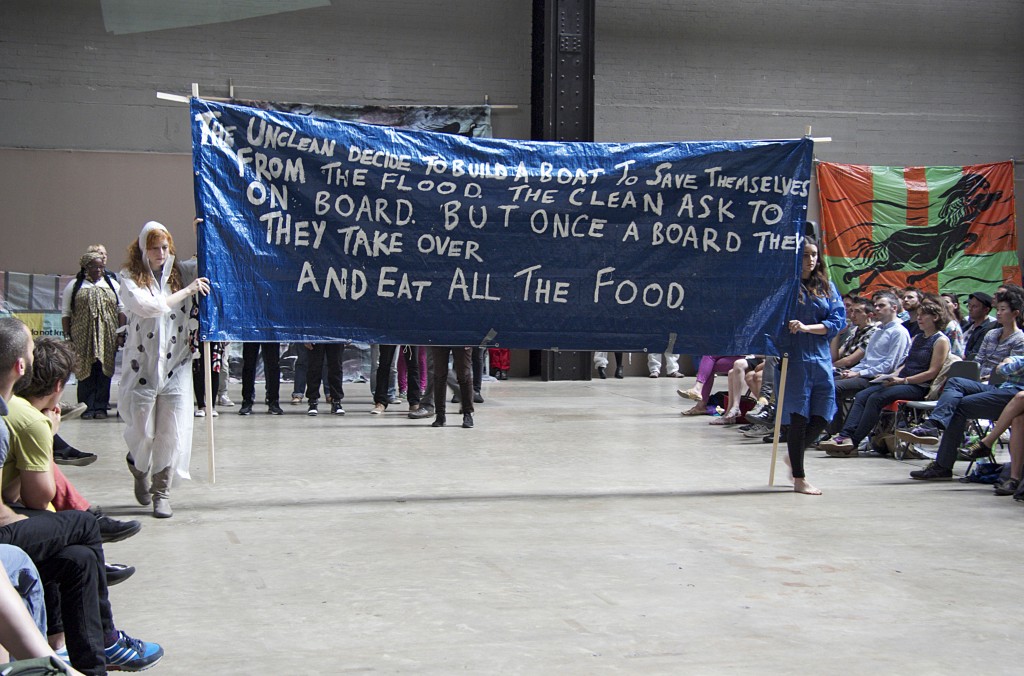 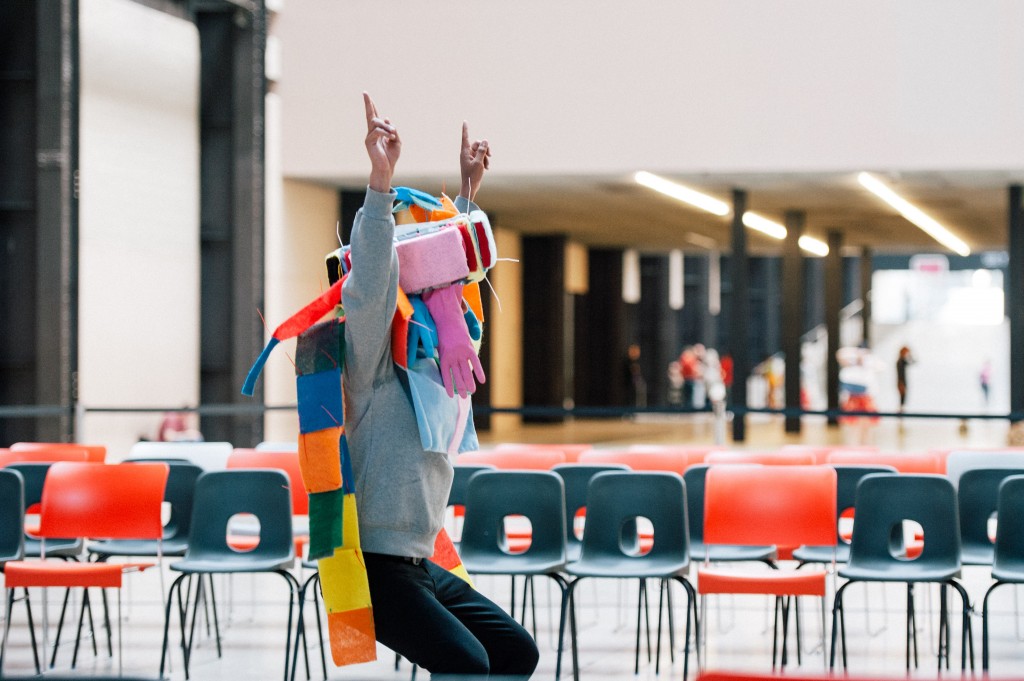 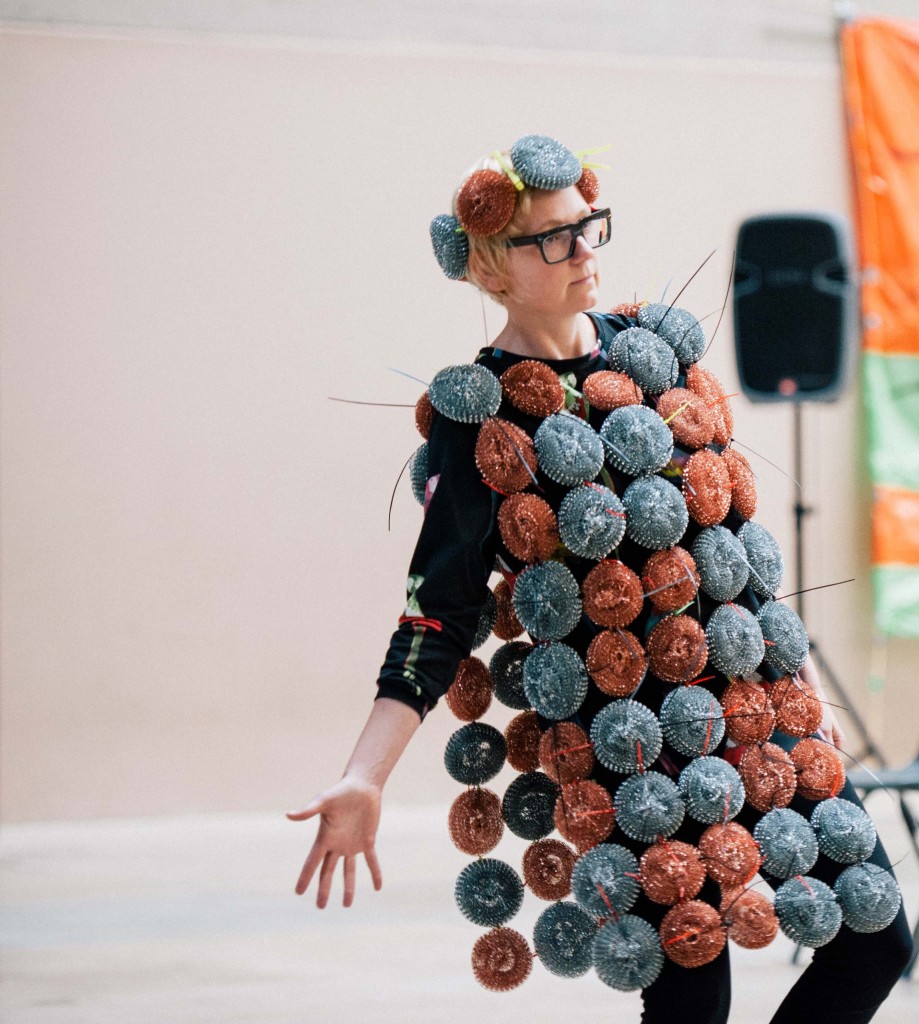 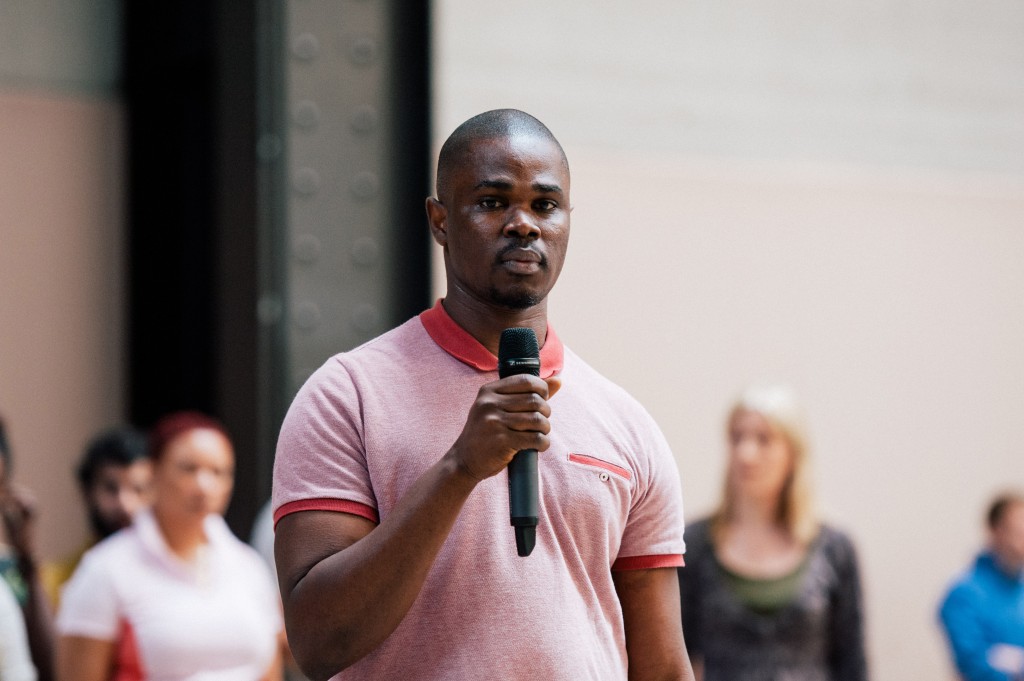 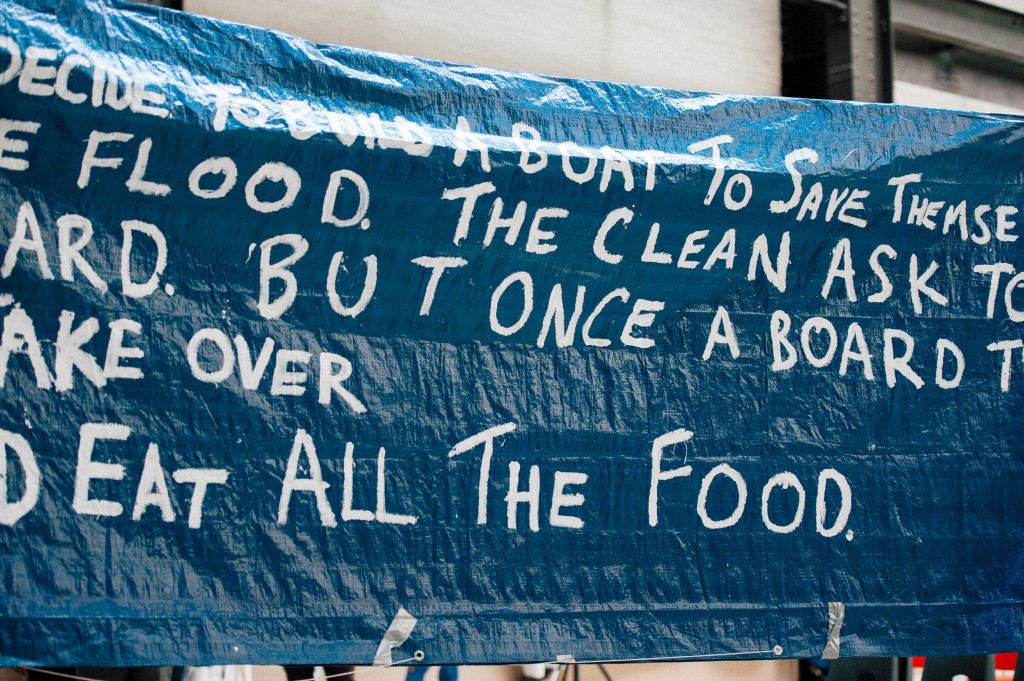 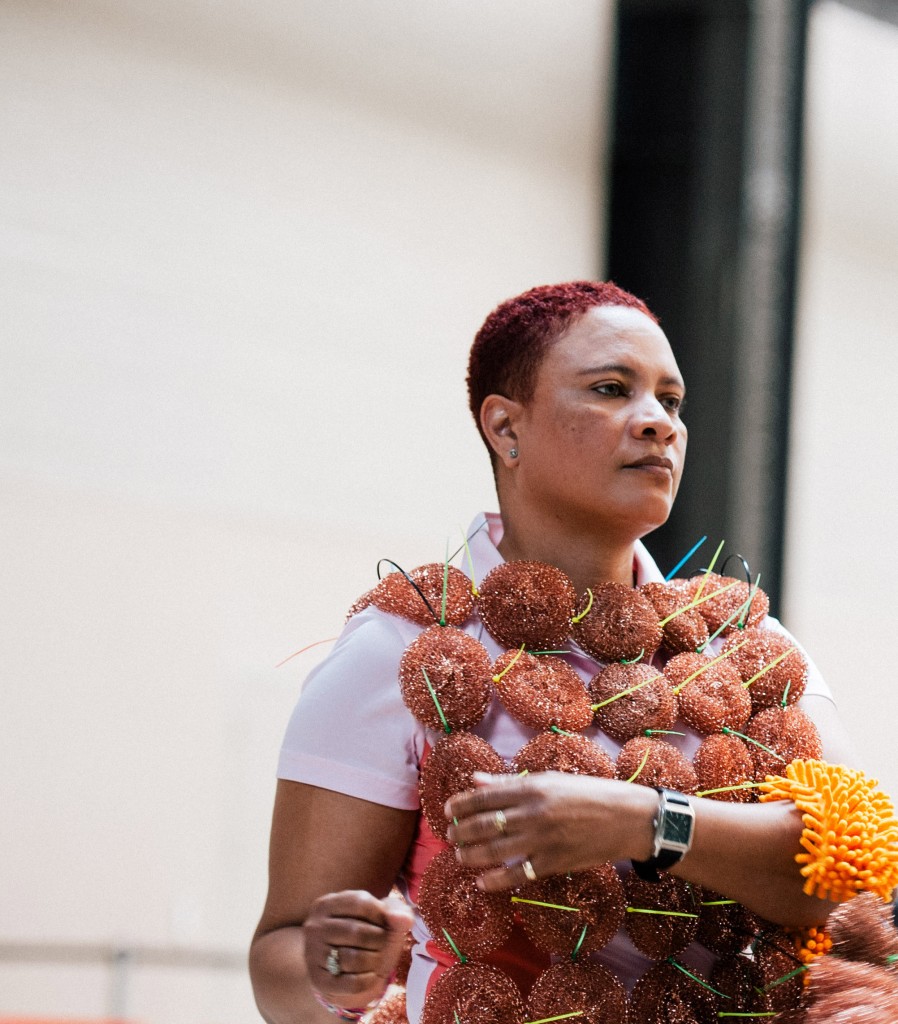 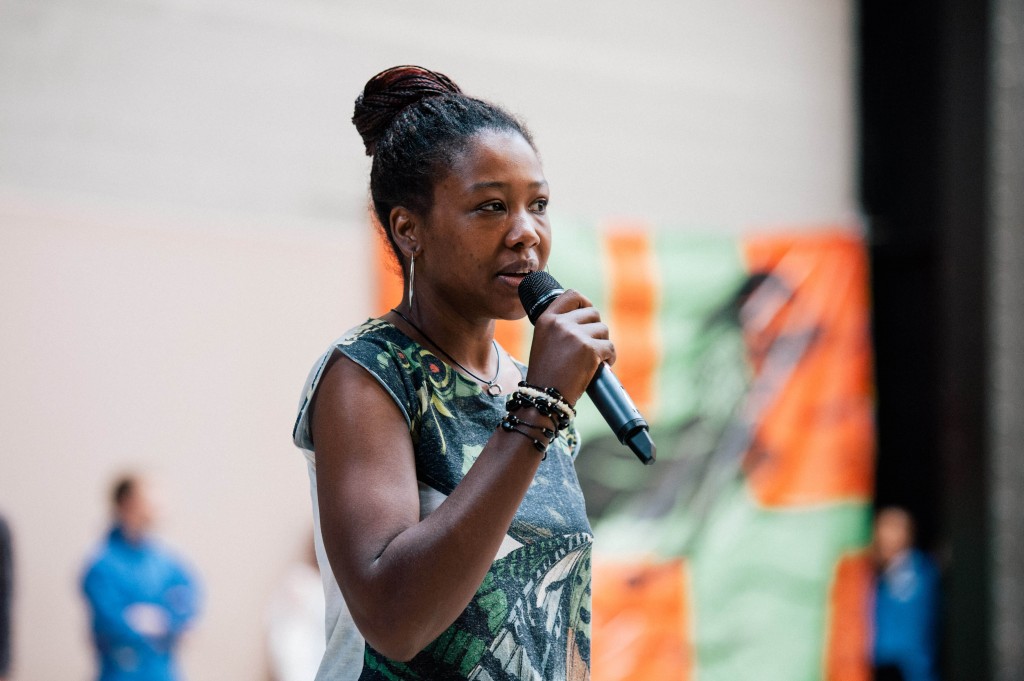 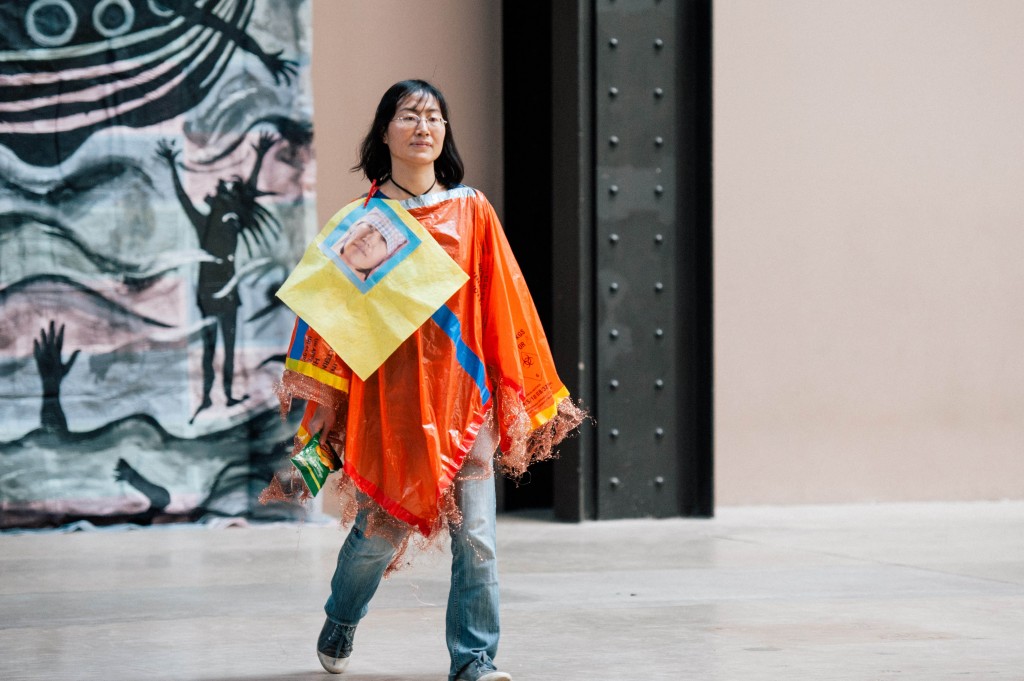 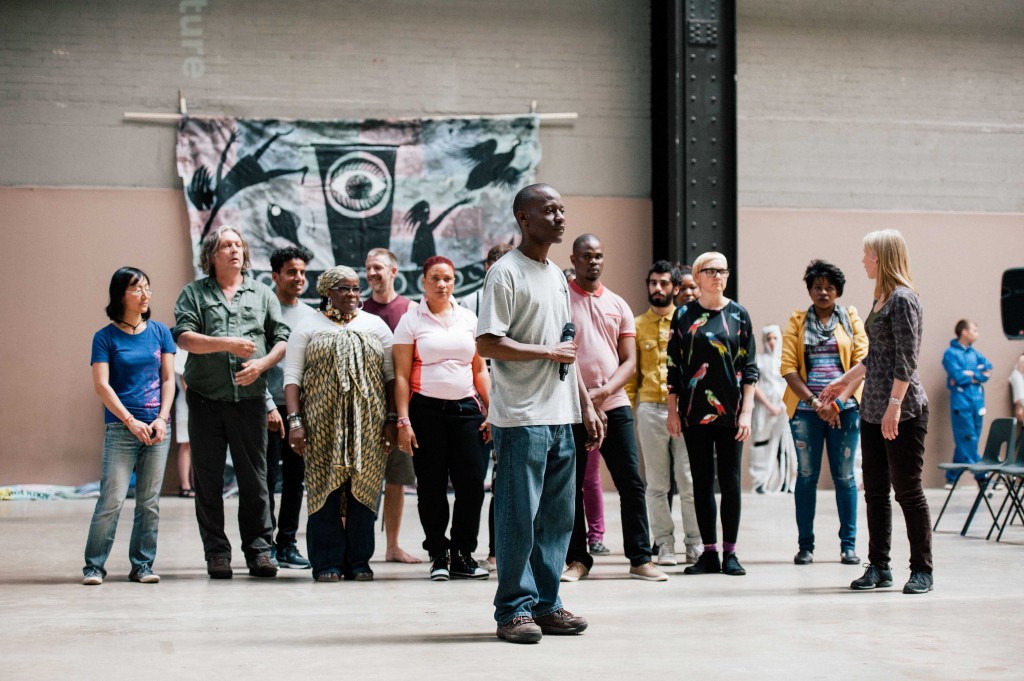 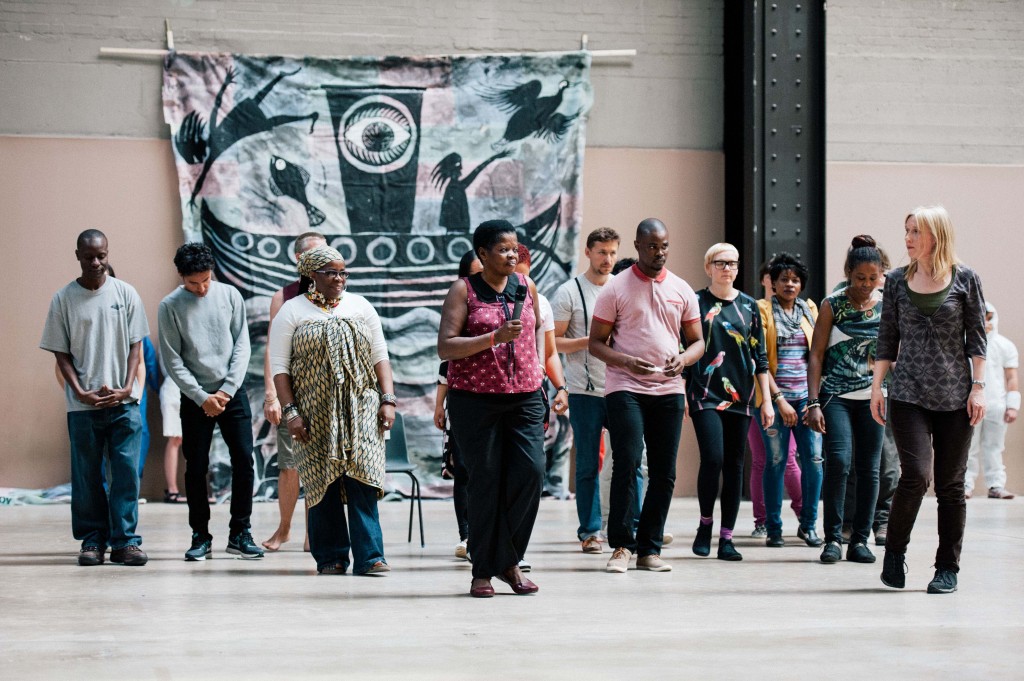 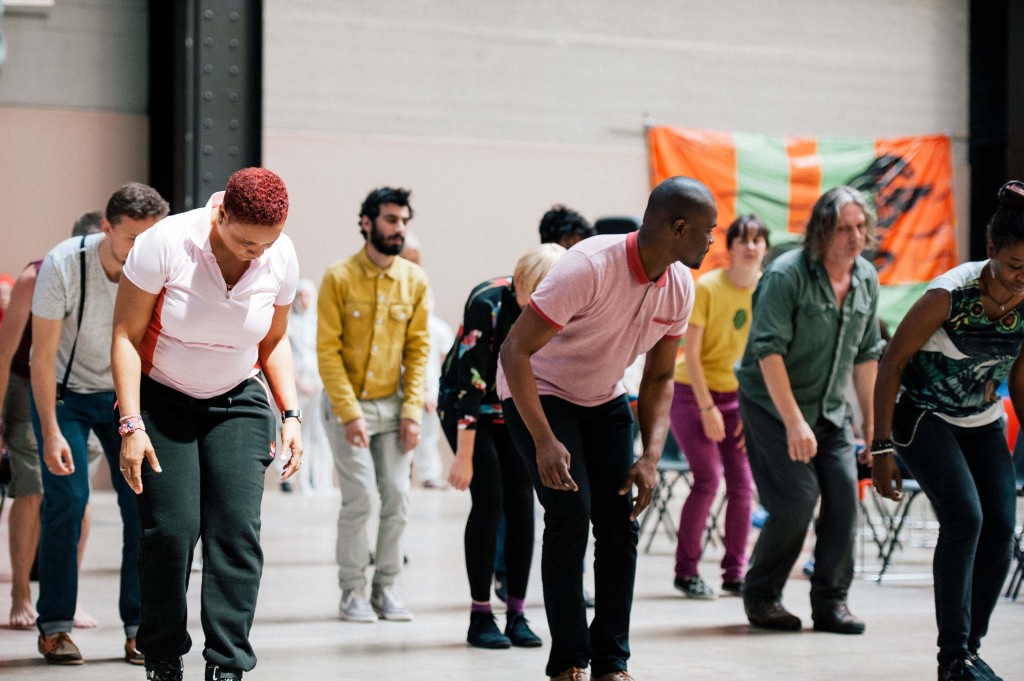 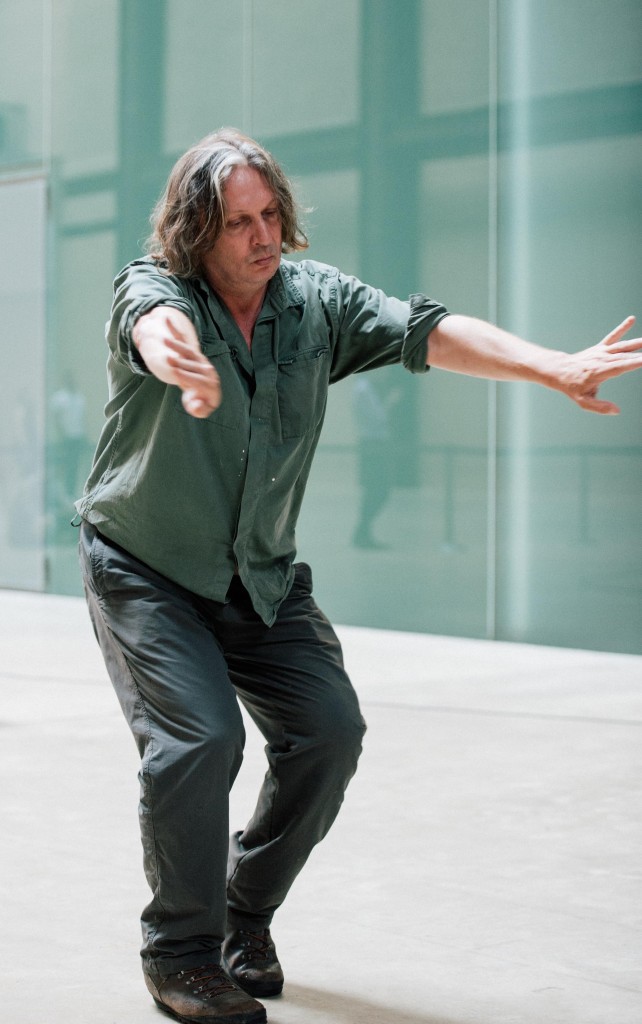 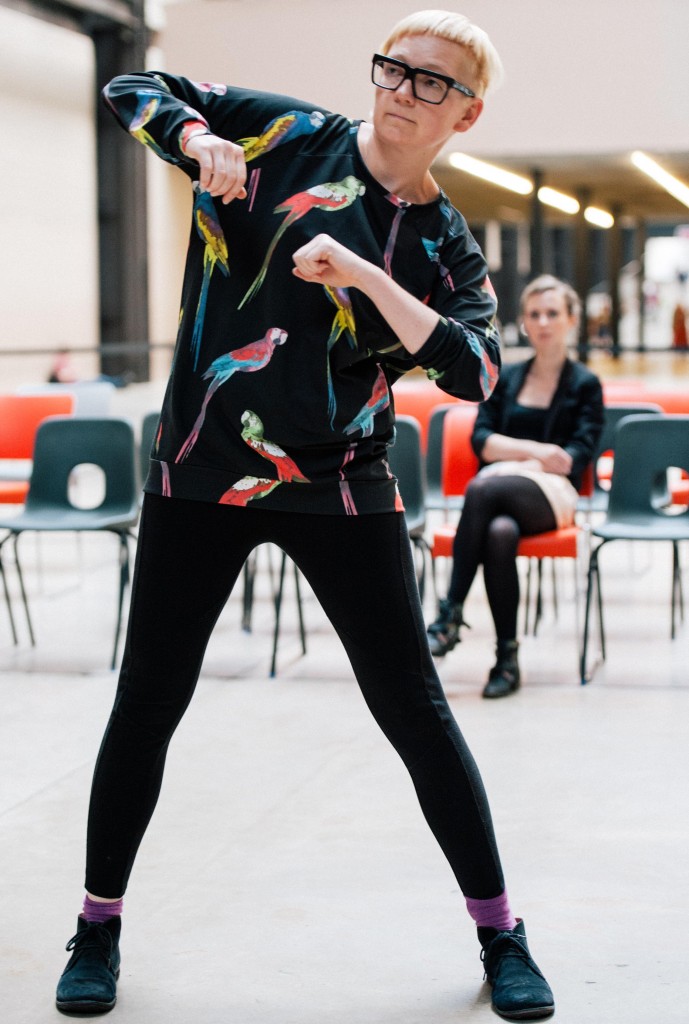 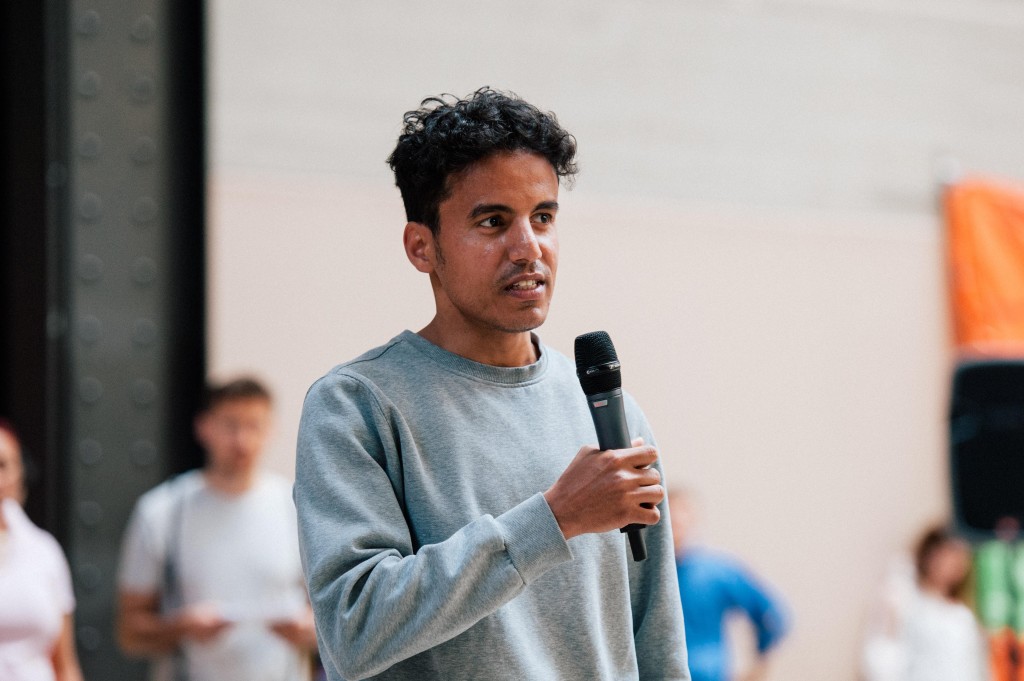 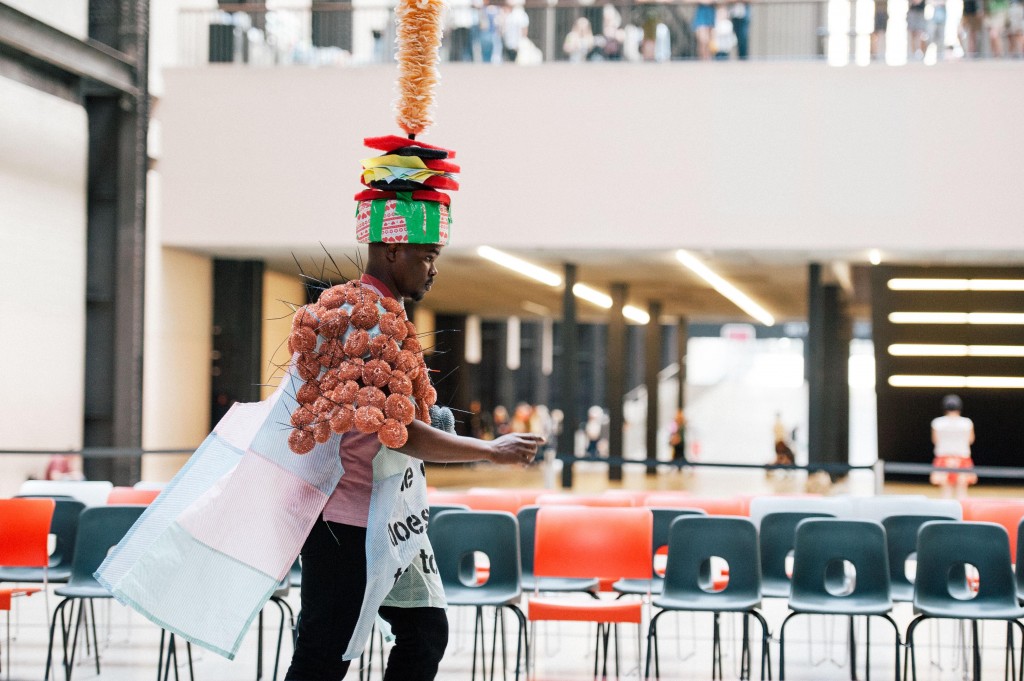 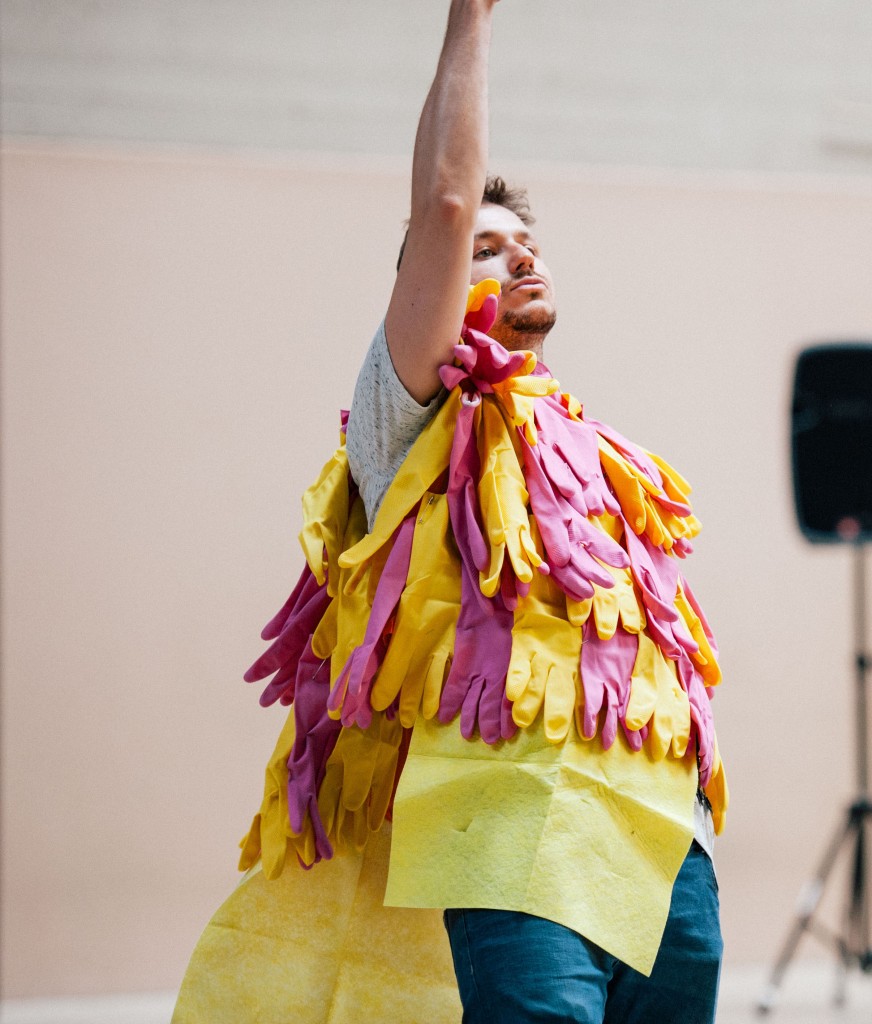 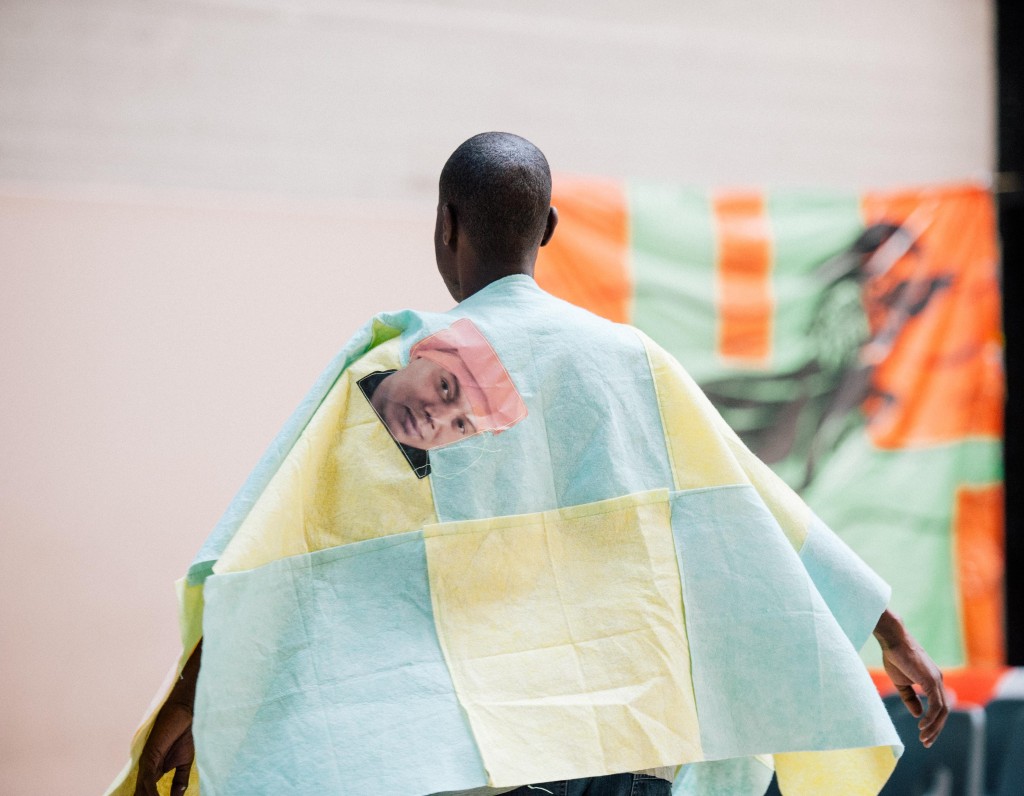 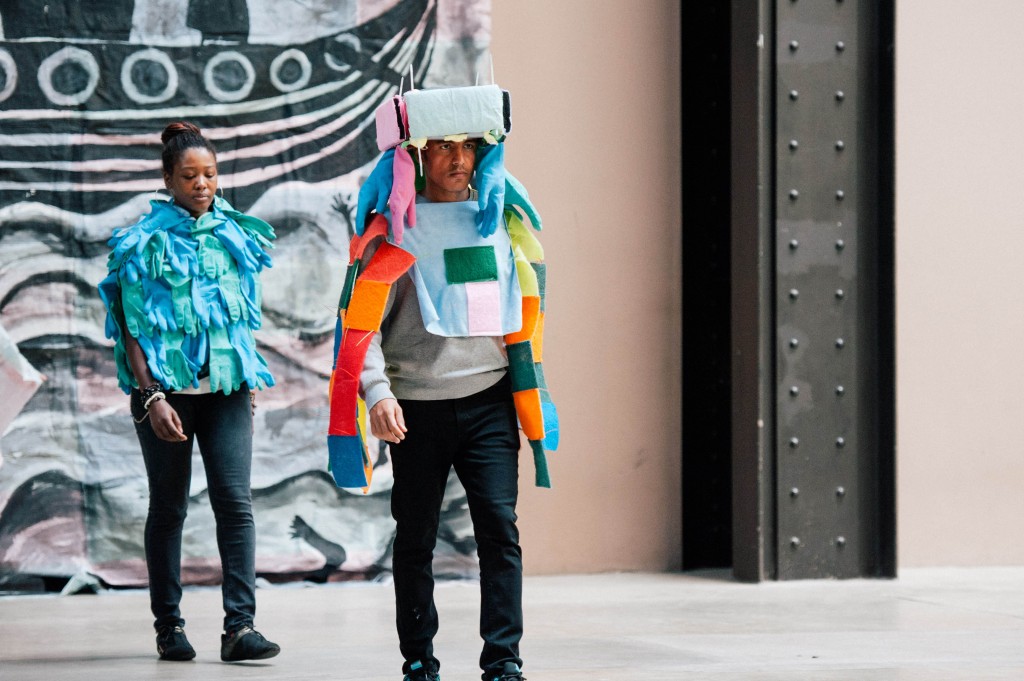 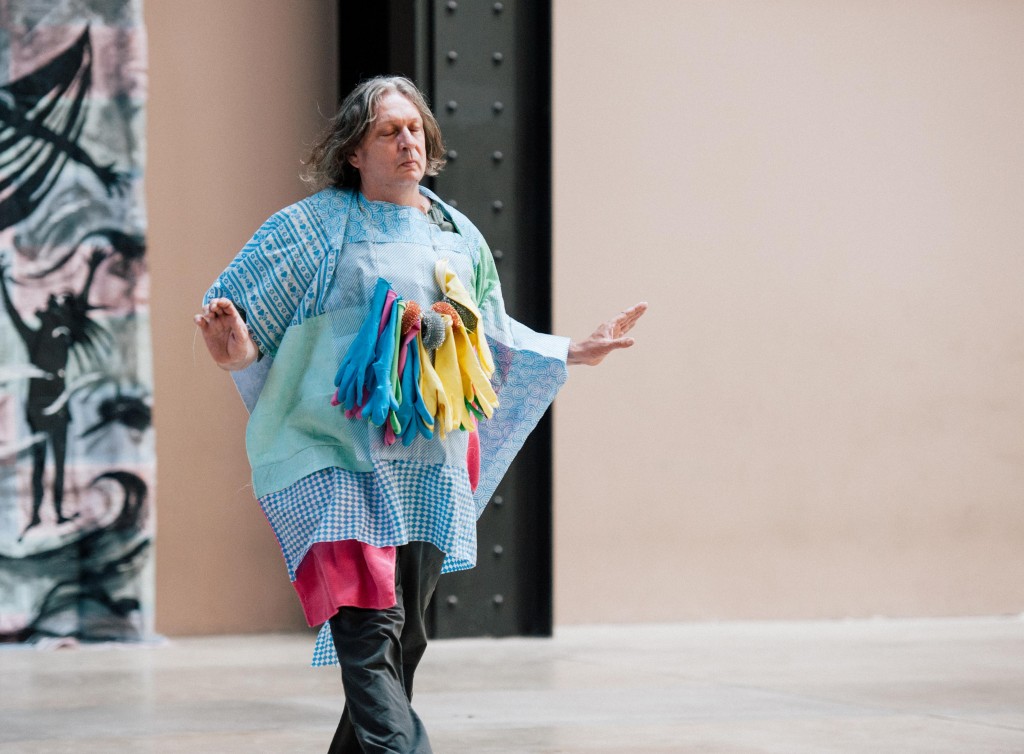 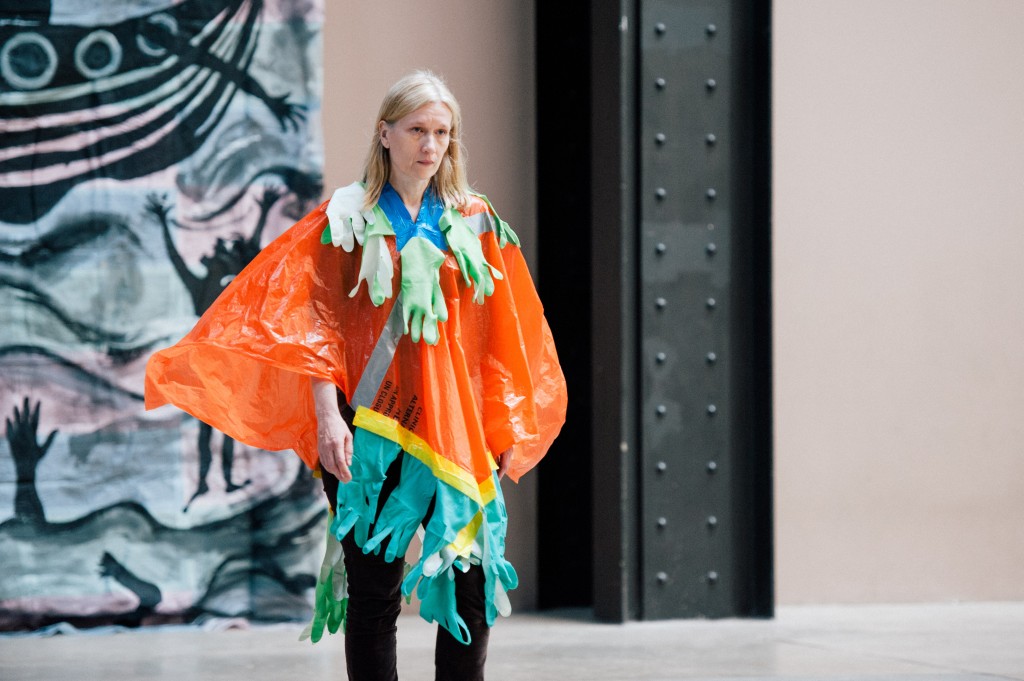 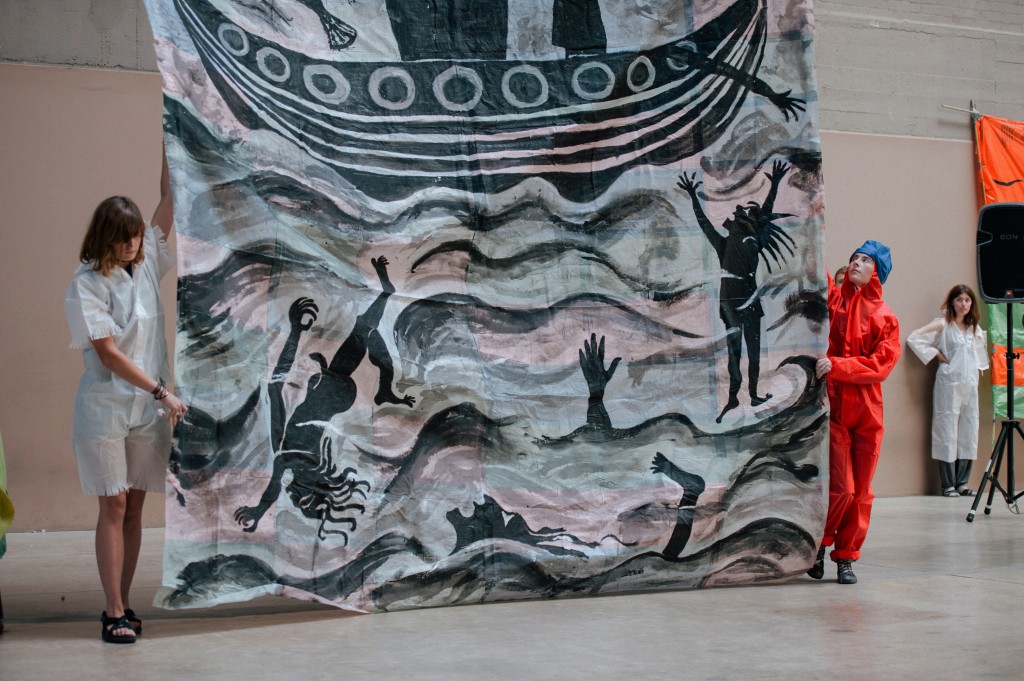 Radio interview 23 minutes on Party for Freedom and the World is Flooding, Art Monthly

For a full performance documentation please go to Vimeo

Artmontly interview about The World is Flooding, Animal with a Language and Party for Freedom 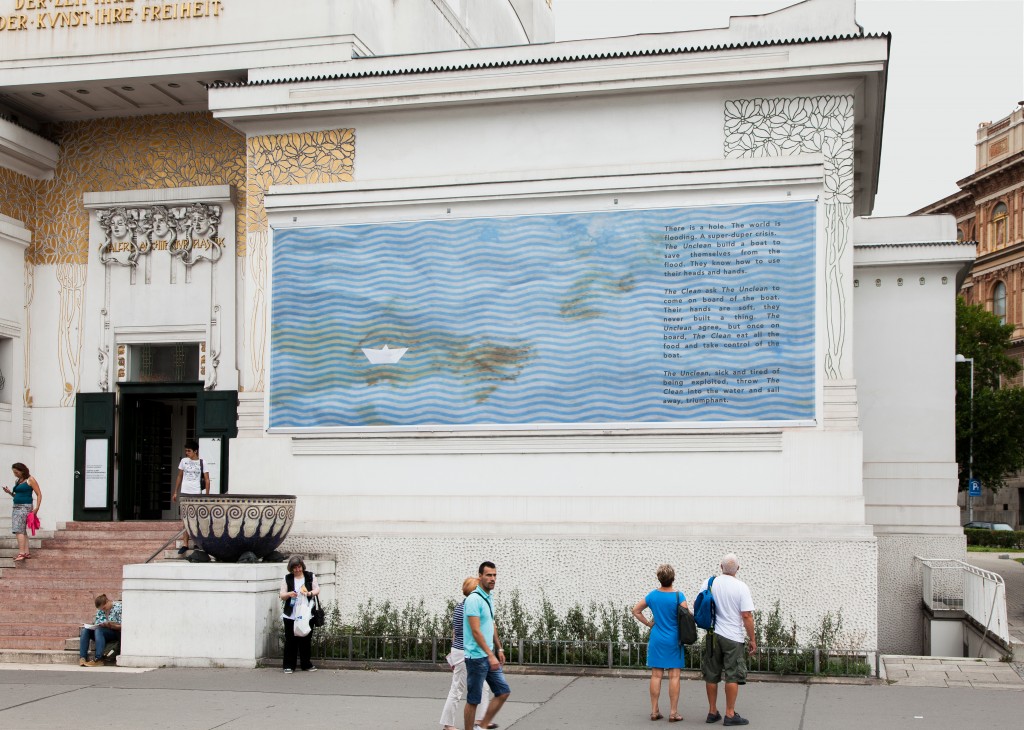 The World is Flooding is a performance based on Mystery Bouffe, a Mayakovsky play written in 1921 for the anniversary of the 1917 Russian revolution. Over several months artist Oreet Ashery worked with a group of participants to write, produce, and direct a performance. The elements of the performance are influence by Russian futurism, including Malevich’s set designs for Victory Over the Sun and Zaum poetry.

The absurd emerges as a continuous theme throughout the performance, where we are confronted with the absurdity of politics, of the language of administration and power, and of  class and socially based biases.

The performance includes specially made costumes, banners and a zine produced over the course of the workshops.

An indigenous person sticks a finger in the ground and discovers a hole, a flood, a super duper crisis.

Do not think badly of them, do not blame them or punish them they have not created the flood,  Neither did they make it happen, nor were they the cause of it in any way All they did was to discover the flood and inform the world about it.

Excerpt from The World is Flooding performance

The world is Flooding

Introduction to the zine

‘An Eskimo sticks a finger in the ground and shouts: A hole! There is a hole! The world is flooding! Depressing!’

So begins Mayakovsky’s play Mystery-Bouffe, written in 1918/1921 to celebrate the anniversary of the 1917 Russian Revolution.

The Unclean build a boat to save themselves from the flood. The Clean ask to come on board, alas once on board they take over. The Unclean are left with no choice but to throw the Clean into the water. The play continues. The play ends. The Unclean find their earned heavily place.

Mayakovsky introduces a provision stating that in the future anyone can present the play, providing that they make it contemporary, immediate, up to the moment. In an act of faith, he creates a de-authorising contract with the future – no official licensing needed – trusting that at any point in time an urgent sociopolitical moment would be foregrounded.

The framework of the play creates a world’s schema, combining elements that absurdly expose the language of administration and mechanisms of power and social biases. Over a period of three years I worked with this context in two projects, Party for Freedom[1] and most recently The World is Flooding[2]. The World is Flooding is a project with participants from Freedom from Torture (Write to Life), UKLGIG (UK Lesbian and Gay Immigration Group), Portugal Prints, as well as people who arrived at the project individually. Collectively we created an absurdist script for a performance at Tate Modern Turbine Hall, large-scale banners and a set of ponchos and headgear made of cleaning materials.

The script for the performance, images of the group modelling the ponchos and some of the drawings we developed during the project are the mainstay of this zine.

Who is the Eskimo? Who are the Clean and Unclean of today? What is the boat? How do we save ourselves from the flood?

Through a series of workshops we adapted the play to make it our own. We’ve developed the figure of the Eskimo as that in possession of the agency of discovery. The Eskimo is at once a whistleblower, a messenger, an innocent child forming an early comprehension of the system and a newcomer experiencing a new environment for the first time, perhaps an asylum seeker. The figure of the Flood came to represent that which is ‘too much’; too many feelings, too many demands, too many traumas. The Boat we understood to be the thing that saves us from a crisis such as advocacy, education, art, policies, working together. Alas, the Boat also turned out to represent the idiosyncratic systems we all inhabit, such as the asylum-seeking system in the UK, the health system or the legal system. The Clean and Unclean were proving to be complicated entities; poets, artists, thieves, a corrupt elite, those in need of help, outsiders, hypocritical politicians; all mixing class, race, gender and sexual orientation. To complicate things further, The Clean and the Unclean tend to merge, sometimes becoming one and the same.

In our script, the Eskimo only ever saw ice in iceboxes, so when she/he sees snow for the first time, they touch it and the snow melts under their hands, rendering their hand numb.

The chorus asks: How can we discover without getting numb?

The chorus areplies : Without getting numb.

Mayakovsky’s Mystery Bouffe is based on the genre of Mystery Plays that were popular in Europe during the middle ages before professional theatres emerged. Mystery plays employed sets of tableaux, usually with two choruses that respond to each other. The performance The World is Flooding continued the use of tableaux, with group actions such as dance and speech. We have used the chorus to emphasis for example elements of absurdity by repeating the last word of certain sentences. The repeated words then create a secondary script. We also used the chorus for the repetition of the sentence: ba…ba…baaa… not spoken like a sheep but more like the ‘blah blah’ manner of dismissive speech. ‘The baaa’… was introduced to cut into the script as a device that embodies the carelessness of the system and the feeling of not being taken seriously or being ignored, no matter how important and urgent one’s narrative is.

The world is Flooding performance also shares similarities with Brecht’s notion of the Epic Theatre. The Epic Theatre was developed as a forum for political ideas and proposed that a play should not cause the viewer to identify emotionally with the performers, but should instead provoke self-reflection and criticality by using various alienating devices such as removed acting style, the use of banners and a lack of resultion.

With thanks to Andrew Mitchelson, David Curtis-Ring and Ania Ostrowska for their help with the banners and ponchos. Thanks to Morgan Quaintance for creating the music for the performance.

Thanks to Nora Razian and Emily stone, as well as the AV team at Tate Modern for all their support.

@ All images are copyrighted to Oreet Ashery. Images by Oreet Ashery, Jack Woodhouse and Nora Razian.

[1] Party for Freedom was an Artangel and Performance Matters commissions.

[2] The World is Flooding was a Tate Modern Public Programs commission.